A garden full of musical instruments made from junk and recycled materials for collective music making in the city!

Inspired by a Gap Filler supporter and volunteer who sent in a video clip of Brazilian street musicians installing musical instruments on lamp posts and road signs for serendipitous discovery by pedestrians, this project offered locals and visitors to Ōtautahi-Christchurch a way to make some sweet sounds in contrast to the demolition/construction noise scape. The instruments were incorporated into the garden itself with plantings wrapped around each one.

The Sound Garden allowed for anyone to play music, any time. We loved it when the Sound Garden inspired impromptu jam sessions, too for the delight of discovering sounds and music-making techniques and for the social interactions it too inspired. 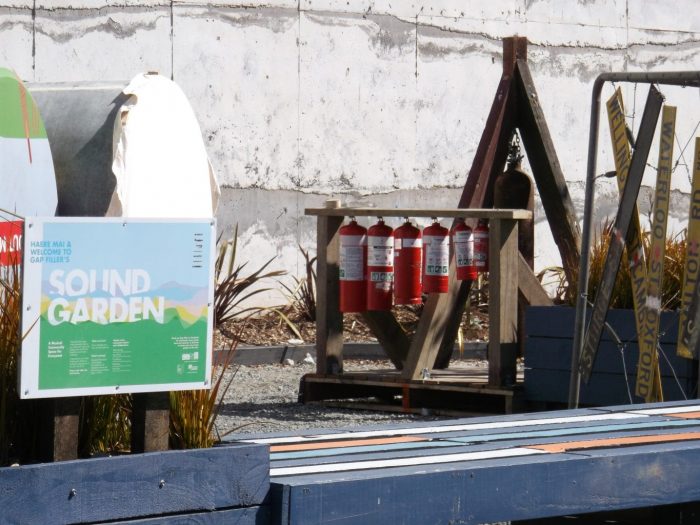 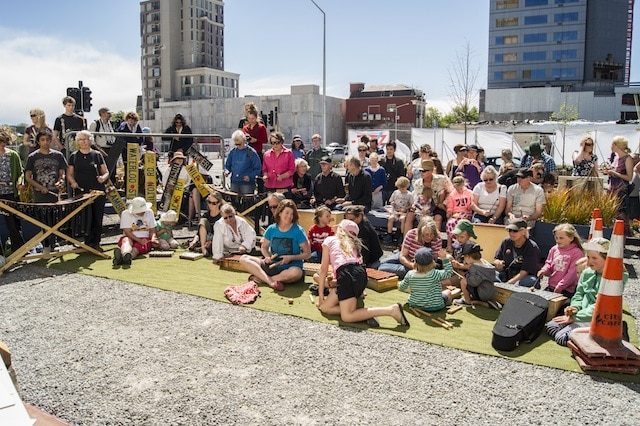 The Sound Garden opened as part of FESTA on Saturday, 26 October 2014 on the corner Colombo and Gloucester Streets, with support from Random Acts of Music.

Gap Filler, Greening the Rubble (now known as The Green Lab) and local creatives Gaby Montejo, Jason Ware, Tim McGurk and Trent Hiles created a variety of musical instruments from recovered and re-appropriated materials. Giant drums made from pipes, chimes made from old fire extinguishers, an aerophone made from pipes and more. These were been installed in garden setting for the public’s playing pleasure, ready and waiting to be discovered – to be struck, strummed, and swivelled. The garden component was designed by Greening the Rubble’s Jonathan Hall.