The Lyttelton Pétanque Club (or LPC) was a temporary project on the corner of London and Canterbury Streets, in Lyttelton, Christchurch’s port town. Created in July 2011 by a bunch of Lyttelton locals and a few folk from over the other side of the hill from Gap Filler, it took on a life of its own. This temporary project sowed the seeds for the permanent project, Albion Square, that fills the space today.

In mid-2011, a small group of Lyttelton locals wanted to do something positive to bring energy, life and activity to one of Lyttelton’s vacant sites. Lyttelton had been badly affected by the major quakes of 2010 and 2011 that destroyed or closed half of the buildings on the main street. The owners of the former Albion Hotel site (44 London Street) were keen for something to happen on their land. They connected with Gap Filler who in turn connected with four locals and Lyttel Gap Filler was born. A few meetings were held in May and June of 2011 and the idea for the Lyttelton Pétanque Club took shape. Across this time in Lyttelton there was a growing sense of the need to do something in the main street of the town. The winter was hard. Demolition was taking place daily. People were sad and bewildered and this was exacerbated by a significant aftershock in early June 2011, which tipped some buildings from being saveable to not. The Lyttel Gap Filler group decided that a place for people to gather, sit, talk, perform, or just hang out was needed, and thought the idea of pétanque in Lyttelton would be rather fun.

Two working bees were held in late July 2011 to create the space. These were promoted through Facebook, Gap Filler’s email list and by using a blackboard put out on the site. Volunteers young and old cleaned up the site, made seating from pallets and tables from cable spools, created the pétanque pitch, cleared the ‘stage’ (a small piece of the residual foundation from the kitchen of the Albion Hotel), and planted a garden. The Lyttelton Pétanque Club was born.

Cost: around $800 and this included lime chip, fixings, waratahs, and fairy lights. Tools were loaned and time was gifted to create and maintain the space.

People: Around 35 people helped to create the space. We estimate approximately 10 helped to care for it week to week. 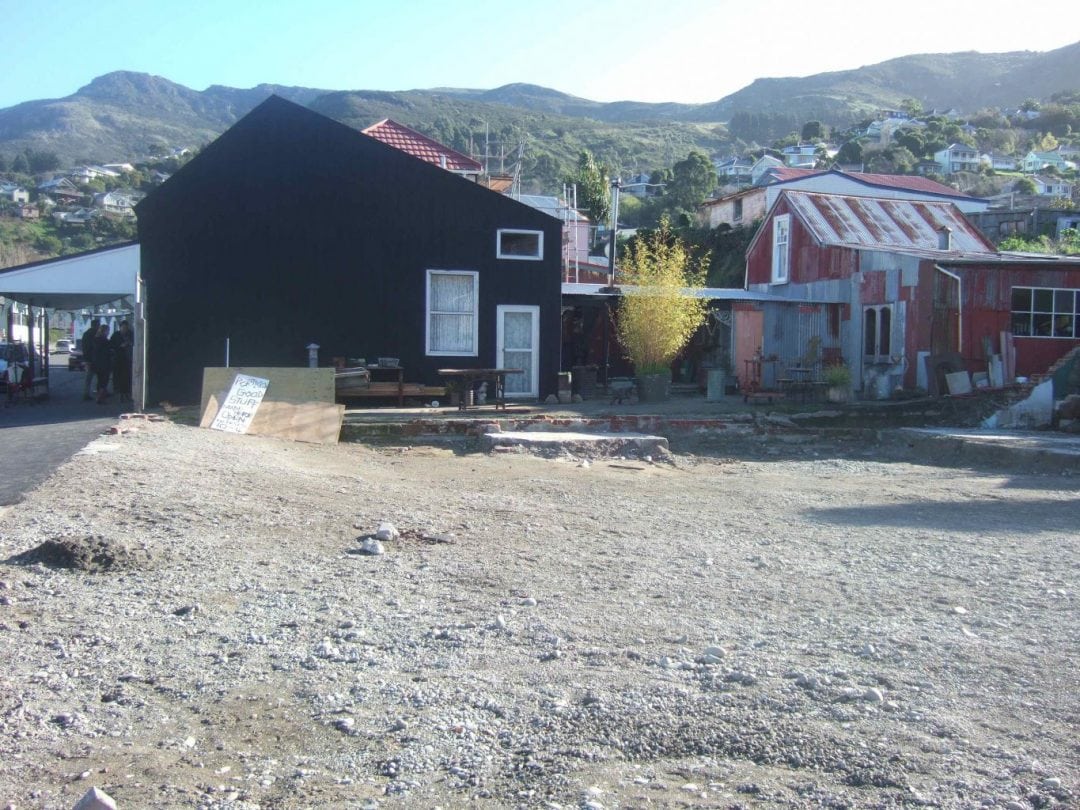 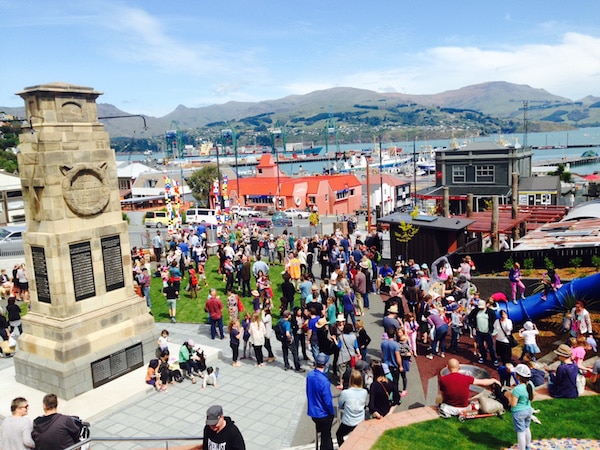 Over two years the LPC – as it was known hosted – a wide variety of events and evolved into a community hub and an informal town square. Poets and musicians performed thanks to power lent by the neighbour. It was significant that the site hosted the first anniversary of the February 22, 2011 quake. In the evening summer sun hundreds of people spilled out onto the street as people spoke and sang. Local band The Eastern played, kids hula-hooped and people reflected on what had happened to their town.

Over the months the site hosted countless impromptu gatherings, BBQs, a few pétanque tournaments and more. Interestingly, the site accumulated things that people gifted to it. A sandpit with kid’s toys, plants, furniture, a hose; people added to the site over time. People weeded it, picked up rubbish and watered the garden. And of course, at times, it got messy and it felt like people were not caring for it, so a sign was put out and a renewed effort to engage people was made.

People had a stake in the space because so many had been involved in creating it. And there was a honesty about the space. It looked like a hotch-potch of random stuff. It looked like local people had created it. And that’s why people loved it. Not everyone loved it, some thought it messy, but many did feel connected to it. And one must remember that Lyttelton, until now, had lacked any large public space on the main street beyond a few benches here and there.

Across 2011 and 2012 Christchurch City Council (CCC) ran public consultations as part of the Master Plan process for the rebuild of Lyttelton. Something they were hearing from the local community was that they wanted places to gather; in other words public space. This desire for space arose from circumstances after the quakes – people needed to gather but there was not much suitable space to do so. People suggested various sites that CCC could purchase and develop for this purpose. One was the LPC. Christchurch City Council, in response to the feedback locals were providing, purchased the land that the LPC occupied, guaranteeing this essential public space a permanent home.

In 2012 the site changed yet again when CCC called for proposals from locals for temporary street furniture, artworks, seating and lighting installations for the site. It was a requirement of these projects that they be relocatable. $80 000 was allocated to these projects and Gap Filler was invited to have one of five roles on the selection panel. Around 15 proposals were received and 7 were selected, funded and realised. Three of those projects (a sculpture, a tiled mandala and a mosaic chair) remain on site today as part of the final design, having been relocated as part of the development process.

The site has now evolved to become Albion Square and was opened officially to the public on November 8, 2014 as a permanent community space. The project was undertaken by a construction company across 2014. The Albion Square project has used the entire site. The higher back section was not part of the LPC project which dealt with the lower section only. The cenotaph commemorating Lytteltonians lost in the wars of the 20th Century was relocated from another part of the town to the upper section of this site. There is a stage, amphitheatre-style seating, play equipment, a water feature and a grassed area. For the Lyttel Gap Filler crew, it feels satisfying to have played an important part in helping to make this happen. Out of the rubble and confusion of the quakes, something special took place here. 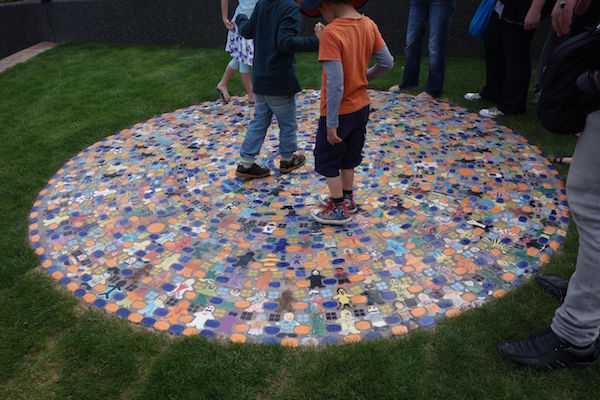 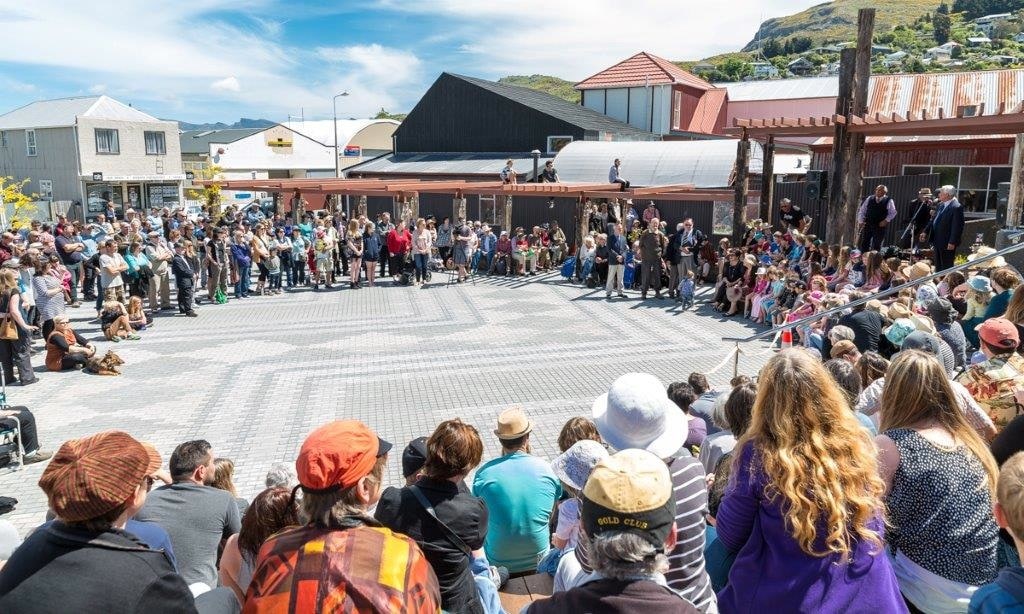 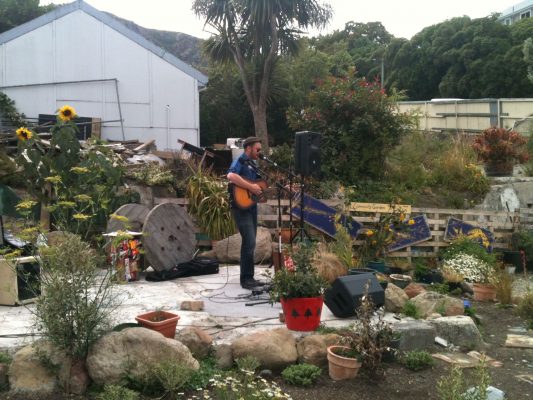 According to Lyttelton-Mt Herbert Community Board Member Paula Smith, the LPC project acted as a catalyst for the permanent project on the site. She feels that it gave people a taste of what a public space would be like in Lyttelton. According to Paula, prior to the ‘quakes there hadn’t been much discussion or call for any public spaces in Lyttelton. This desire arose after the quakes, when the need to come together was strong and pressing; the absence of such spaces in a time of crises was apparent.

It is certainly of interest to those involved closely in the project from Lyttel Gap Filler to observe to what degree the sense of community ownership of this site continues now that the site has been developed. The café next door spills out onto the square, customers placing orders and awaiting their food or drink whilst sitting in the public space. The weekly Saturday Farmer’s Market, which now makes use of the main street, helps to activate the site. Performers take to the stage to make the most of the crowds. The site will be active as part of the 2015 Summer Festival, too.

How will the space be used over time?

..Will people plant things in the garden?

How will the space be used over time? Will people plant things in the garden? Bring furniture? Organise events here like they used to? Or will the mostly ‘finished’ nature of the new space prevent that? Will people turn their sites to other vacant sites in Lyttelton for temporary activation? It seems like some of this is happening with the amphitheatre and jump park project on the old Empire Hotel site.

The ramshackle nature of the site is gone and the current site is far more polished and has clearly been ‘professionally’ designed. The ground is paved with grey pavers. There is a formal stage with power. Amphitheatre seating is built into the slope of the hill. The cenotaph on the upper section of the site is an imposing object. There are those that dislike the developed site, preferring what it was before and finding it over-designed and brutal, and there are those that love what the site is now, thinking that the design incorporates the right amount of potential for a range of uses and possibilities.

Picking up on the design of the site, it strikes me that it is rather slick for Lyttelton. That isn’t to say that Lyttelton is shabby, rather that many things there have a grit about them. It’s a port town. Salt water ages wood, metal and paint. It’s just a theory (which I’ve tested on a few locals with some success) but I think if CCC had developed Albion Square without the LPC having gone before it and without much consultation I think a great deal more people would have rejected the square; it being almost ‘too fancy’ for Lyttelton and imposed upon them by something external. But instead, there’s a sense of pride in the space. That people earned it through hard yakka. That Lyttelton deserves something like this for its people to gather. 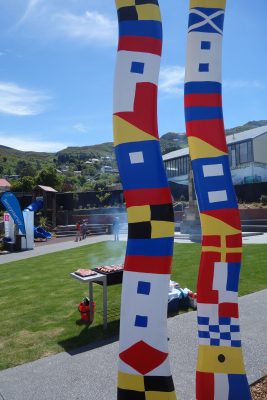 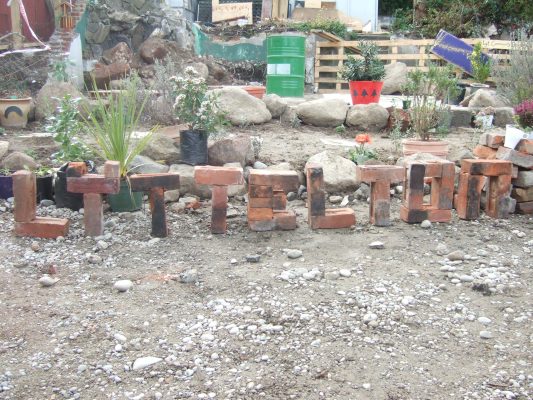 Lyttelton is a town where people have strong opinions and aren’t afraid to tell you what they think of you or your project. We look forward to hearing them over the coming years. Ultimately, this project was a fascinating example of how a temporary project can play a role in seeding a permanent development. It is also a rare example of the transfer of private land into the public domain.

DIBLE!!!  In true Gap Filler fashion we designed and built this project through collaboration and community support. 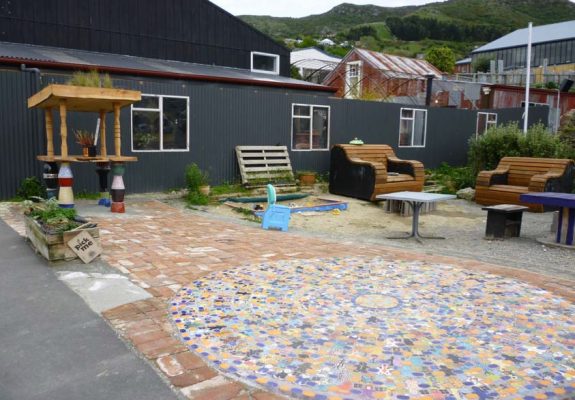 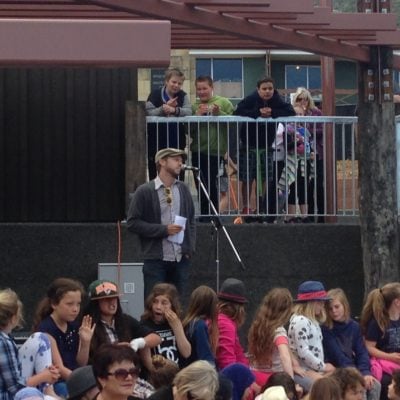 From the Lyttelton Pétanque Club to Albion Square. A temporary project evolves into something more permanent, Gap Filler Article 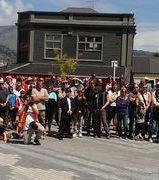 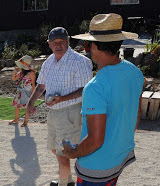 Lyttelton Port & Pétanque: A beautiful Tuesday evening in the busy port of Lyttelton, still lively despite the ongoing shakes.

Lonley Planet: What to do in Christchurch: your post-quake guide