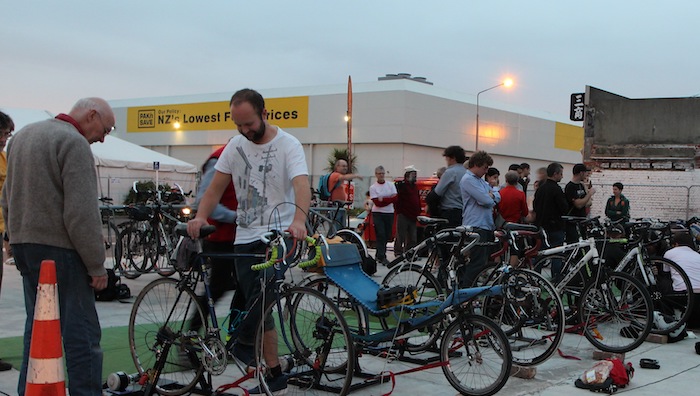 Like it sounds, a pedal-powered cinema on a vacant site in central Christchurch screening cycle-themed films! 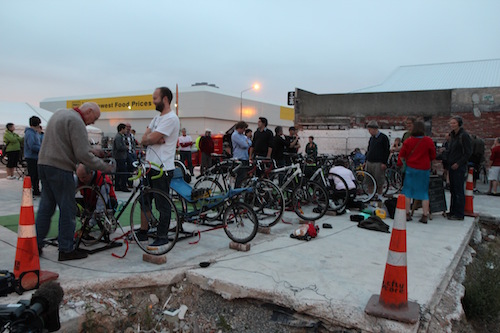 In 2012, after the quakes there weren’t any cinemas in the central city. Christhchurch central city had many decades before been home to a lrage number of cinemas and theatres and even just before the quakes, it had a number of cinemas. Cycling was also a political issue – what would the rebuilt city be like for cyclists? Would there be proper investment in cycle lanes?

We decided to combine our love of cycling and cinema together in a Cycle Powered Cinema on the former site of Cycle Trading, one of Christchurch’s longest running bike shops. It was run over two weeks in Februrary.

We were also able to source archival footage from the New Zealand Film Archive and screen historical films such as Daughter of Christchurch and Cars to Carrington, from the 1920s and 30s. These were screened with live music performed by Anita Clark (violin) and Simon Gregory (guitar).

We also had the help of many volunteers over the 2 weeks to assist setting up and packing down each night.

Local engineers designed and built ten special stands so that members of the public could generate power while riding their own bicycles. This powered an outdoor cinema which showed a variety of bicycle-themed films across several nights. A series of LEDs strapped onto the cycles’ handlebars indicated when the riders were riding fast enough to charge the battery that ran the projector and sound system. A sequence of lights near the screen indicated whether the team of cyclists was generating enough power at any given moment.

For those of you interested in how these units were made, please feel free to download this PDF document by Kerry Mulligan who helped create them.

Please note: we have since gifted the cycle powered cinema units to non-profit organisation, RAD Bikes (www.radbikes.co.nz),  who administer and hire out the units, so please contact them if you are interested admin@radbikes.co.nz 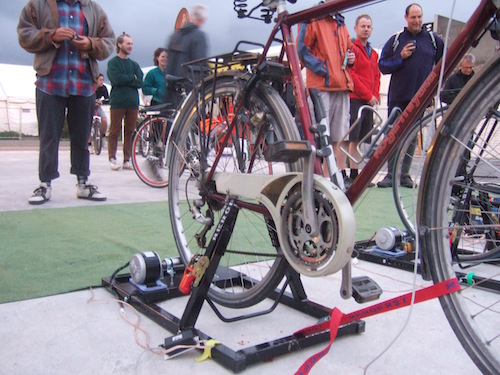