The Retro Sports Facility and Grandstandium!

The Commons is also home to the Grandstandium – a small, relocatable grandstand which was launched as part of the Festival of Transitional Architecture in October 2014.  A weekly programme of “Eyes on the City” will recommence soon, providing a front row seat from which the city’s recovery can be viewed and critiqued, with live commentary, guest speakers, sausage sizzle and popcorn! If you didn’t manage to get a seat at one of the Grandstandium‘s nine city locations last time, you can read about what you missed here.

The Grandstandium is able to move around the city to sit alongside a range of events – sport, arts, community, rebuild or otherwise – and is available to hire.  For enquiries contact anita@gapfiller.org.nz.  This project is being supported by Aurecon (engineering) and Steel and Tube (materials).

The name and intention of the Retro Sports Facility is rooted in the politics and the everyday experience of living in Christchurch. The name refers to the CCDU/CERA Anchor project, the Metro Sports Facility, which will be constructed in the next few years. Cantabrians are passionate about sport; it brings communities together. But in Christchurch at present, sport is a political issue. There are debates around the CCDU’s proposed covered-stadium and the loss or closure of facilities such as QEII, Centennial Pool and suburban pools.

It often seems that art and sport are seen as oppositional in Christchurch. The Retro Sports Facility seeks to make sport more creative and art more athletic and takes inspiration from David Cross’ inflatable Level Playing Field/Powerslide project as part of the SCAPE Biennial of Public Art in 2013 .

As part of the project, we are inviting people to suggest ideas for sports that can be played at The Retro Sports Facility for the seasons ahead.

We’re seeking ideas for sports of a ‘retro’ persuasion that can be played here. They could be from people’s childhood or from long ago. Ideas that we’ve had suggested so far include jousting, sack races, Old Boys Netball and tag. As part of this project we will organise regular sporting events based on people’s suggestions as well as have sporting equipment available here each day for public use.

The Commons has gone through a range of changes following the deconstruction of the Pallet Pavilion. We are (re)creating a space to bring communities together in the city in a fun and inclusive way. Gap Filler is the site facilitator, overseeing a range of activities led by others such as a Food Collective, the Makercrate (maker space), the Arcades Project, Greening the Rubble (a plant exchange is coming soon), two work spaces, and community events. We also use the site for our own Gap Filler projects,  like the Retro Sports Facility.

If you’d like to suggest your favourite RETRO sport, please email fillthegap@gapfiller.org.nz or get in touch via Facebook/Gap Filler. It could be from your childhood, from the 1920s, from other cultures, the Roman Empire…? Get creative!

We’re interested to hear from people who would be keen to run their own sporting events/games in-line with the RETRO theme on the green space, too.

Project Background
In 2013, the Minister for Earthquake Recovery publicly stated that Canterbury could become the sporting capital of New Zealand in reference to rowing and cricketing facilities being proposed for the city. In 2012, CERA was responsible for the incredible feat of constructing an 18,000-seat temporary stadium in just 100 days. This stadium, located in the suburb of Addington, was to provide a home for the Crusaders rugby team primarily as well as for other sporting events such as soccer.  This feat was made possible by the extraordinary emergency powers in the CER Act. Lack of sport in Christchurch is an emergency it would seem. Meanwhile, the Christchurch Art Gallery has been closed since February 22, 2011 and will not open again until 2015. As yet, no temporary facility has been created for the gallery, which has enterprisingly made do with a range of short-term venues in buildings and new innovative structures (Art Box).  In a city where art and sport are often seen as oppositional, the Retro Sports Facility seeks to make sport more creative and art more athletic. This project takes inspiration from David Cross’ POWERSLIDE project as part of the SCAPE Biennial in 2013.

In July 2014, Gap Filler with Alejandro Haiek-Coll ran a one-day experiment that fed the development of the Grandstandium project. Read more here.

Download the media release for this project here: RetroSports_MR_FINAL 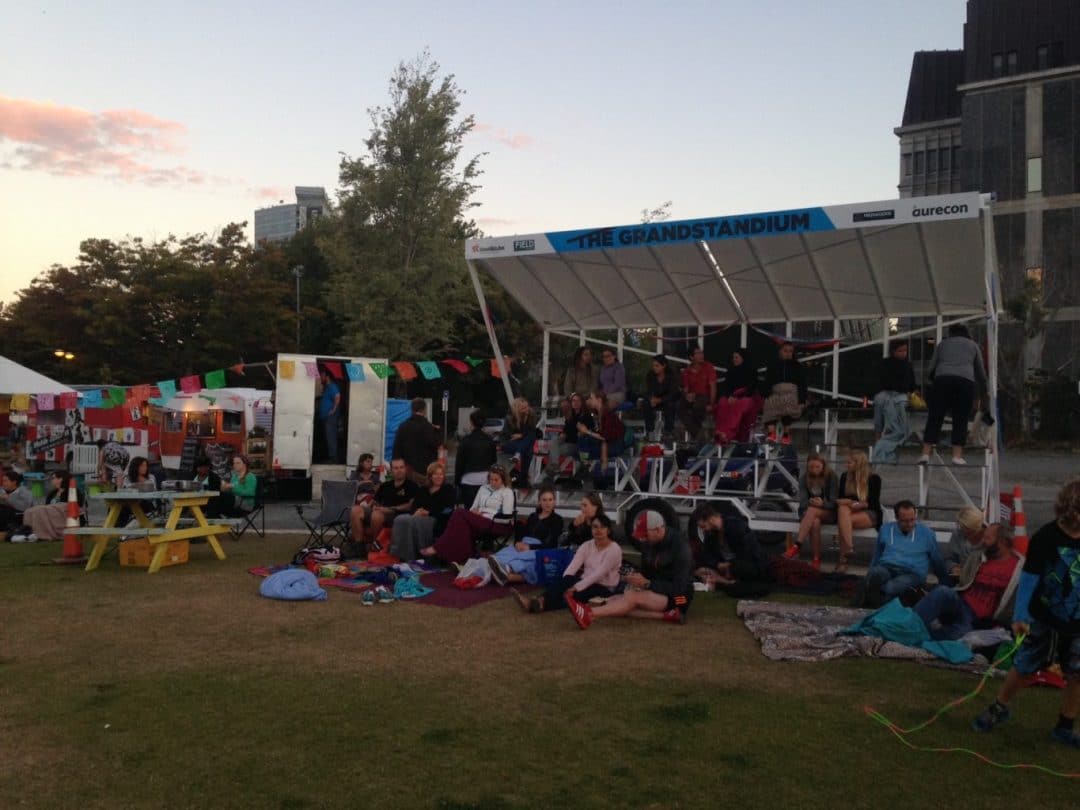