Gap Golf – for a limited time only!

4 holes left! We will be taking down two of the holes in a couple of months, leaving two holes at The Commons.

Putters and balls can be borrowed for a $10 deposit and scorecards (with maps) are available for a gold coin donation from the following:

100 Peterborough Street (opposite the Library)

Corner of Barbadoes  and Kilmore Streets 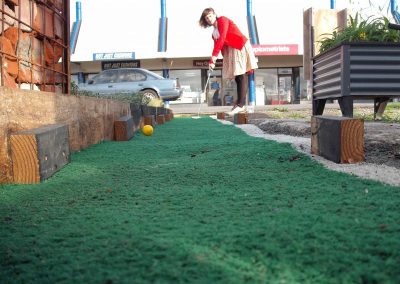 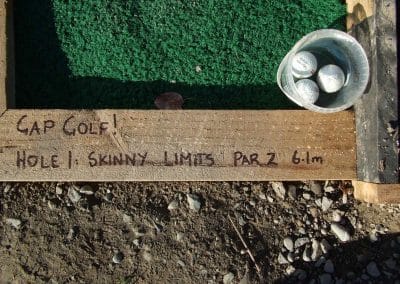 Gap Filler’s Gap Golf project came from humble beginnings – a thin strip of donated, used, artificial turf, some wood and waratah off-cuts, an empty baked beans tin and a bit of land from a Greening the Rubble project – and “Skinny Limits” was born in mid 2012. It was a short par 2 between the first Gap Filler office site (404 Colombo Street) and Coffee Zone in Sydenham. No longer there, but there are now more golf holes around the city; their number and location varies.

Community involvement has been critical in the realisation of this project.

After the Gap Filler crew installed Skinny Limits and Czech Mate (456 Colombo Street, around the outdoor chess set) members of the public, businesses, Gap Filler volunteers and community groups were invited to design and install mini-golf holes to be located on vacant sites around what was once the CBD.

Students from Lincoln and Canterbury Universities, volunteers from Peregrine Adventures and Telecom, SCIRT and CCC employees, a team from Spiire, and Gap Filler friends and family have all contributed to the design and construction of the mini-golf holes across the city. Life in Vacant Spaces provided invaluable support in securing sites, as well as offering a real grass ‘green’ for one of the holes, beside their office at 200 Tuam Street. The ongoing generosity and support from many landowners have enabled this world-first project to develop and become a reality.

The turf was donated to Gap Filler by Sydenham Hockey Club, removed after their post-‘quake undulating playing surface made for challenging hockey games. Other materials have come from Mauger’s Cass Street Recycling Project, Southern Demolition and items left over from the Pallet Pavilion build.

In June 2015 the Aalt Verkerk’s Gap Golf hole was opened on the corner of Manchester and Armagh Streets.  The Dutch themed hole is a nod to the site’s history as A. Verkerks Butcher Ltd and the family’s Dutch heritage. With thanks to Christchurch Round Table, Ladies Circle and Ioan Bramhall. This hole was just decommissioned in May 2016, as the site was needed for another project.

In the true spirit of reusing and recycling the majority of materials have been re-purposed, right down to second-hand putters and golf balls. Some of the holes even reused screws and nails!

“The wonderful thing about this project is that it is for everyone”, says Richard Sewell, Gap Filler project coordinator and Gap Golf enthusiast. “Kids, their parents, the young at heart love mini-golf and we see this as the perfect invitation for people to return to the city together, to play and discover new places whilst travelling from hole to hole. It’s a great project too because it can easily move and grow as sites become available or unavailable.”

Each hole is named by its creators and numbered based on the street address. At each site there is information that include an image of the building that was previously on the site providing a tangible reminder of what once stood on the land. In this way it is to help locals remember and visitors or tourists understand what has happened in Christchurch.

Putters, balls and score cards available from The Commons, koha is appreciated.  The whole course (Commons to Commons) takes about around one and a half hours, although you can just go local and do as many as you want, in the time you have.

The holes will remain in place for as long as landowners are happy for Gap Filler to use their sites. The mini-golf holes can be used by anyone at any time. Putters and balls are available week days from the Gap Filler office at The Commons and every day from the Peterborough Street Library.  Otherwise, come prepared with your own putter and ball.