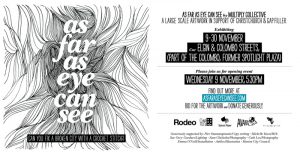 As Far As Eye Can See was a collaborative art project displayed between 9 – 30 November 2011 at the corner of Elgin & Colombo Streets in Sydenham.

CAN YOU REPAIR A BROKEN CITY WITH CROCHET STITCH AND MANDALAS?

22 Adelaide women took up crochet hooks to help refocus attention on post-earthquake Christchurch. Together they created a gallery-size, giant eye artwork, which was displayed in the Colombo shopping centre.

In everyday life the 22 women  work professionally across many disciplines: from artists, designers and dancers to doctors, scientists and project managers. As ‘Multiply’, they’ve produced over 500 hand-crocheted squares using 182,784 stitches to create the pixelated, monochromatic artwork As Far As Eye Can See.

As Far as Eye Can See bears witness, draws attention and gives focus. Seeing in pictures, an eye of mixed media patterns, form defined by texture, subtle, nuanced detail and a diminishing palette of whites and creams, retiring. Pulling back into a bigger picture, the artwork can be seen to be observing, looking forward, looking back, projecting and reflecting light. A window of the soul, a vision, many pieces come together, a form, a whole.. it is As Far as Eye Can See.

The group’s co-founders Stephanie Morison and Lorinda Curnow were moved to act following the February earthquake. The gesture was partially inspired by the fact that Adelaide, Australia is one of Christchurch’s Sister Cities. The artwork was auctioned to raise money for Gap Filler.

Says Lorinda, “This is a story of the invisible strings that connect us in the world, whether it’s a love of art, craft and crochet, a desire to help, or a Sister City relationship. By coincidence, Gap Filler is led by an ex-Adelaide woman, Coralie Winn, who went to Christchurch on a university exchange scheme in 2005 and decided to stay permanently.”

Gap Filler commissioned local artist Briar Cook to work with the community creating a companion artwork, displayed alongside As Far As Eye Can See. The result was a collection of small mandala-like objects woven from the materials that are ubiquitous during the rebuilding of the city: tarpaulins, high visibility fabrics and industrial workwear.

Multiply sought donations to match each crocheted square of the artwork. They also invited Christchurch businesses and the wider community to bid in an online auction to purchase the striking white and cream, 2m x 1.4m artwork.

How the Project Came to Be:

As Far As Eye Can See was conceived by Lorinda Curnow and Steph Morison, creatives working together at Rodeo, a communications / design company in Adelaide, Australia. The concept was born from office banter – a visual art project to marry creative design and textile skills using the image of a single eye, which would capture the essence of Rodeo’s work in visual language.

Soon after, Lorinda was speaking with a friend living in Christchurch and it became clear that As Far As Eye Can See could focus attention & raise awareness for the ongoing story of the city during the difficult times following the devastating earthquakes of 2010 / 2011. They discovered Gap Filler working with artists and community members to creatively regenerate the city and wanted to lend support to the valuable initiative.

Gap Filler is offering an opportunity for Christchurch artists, crafters and makers to get involved by creating a new work that will respond to AFAECS and is calling for ideas and expressions of interest. Both AFAECS and the newly made New Zealand artwork will be displayed in an empty shop window on Colombo Street in Sydenham this November for the public to see. Gap Filler hopes that the successful idea for the Christchurch art work will be one which can be made by a number of people working together.